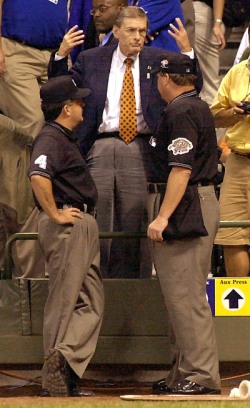 Bud Selig has made the All-Star Game worse since 2002.

Every year when the MLB All-Star Game rosters are announced, there will always be a good handful of players that the public believes were snubbed. But with the All-Star Game, these things happen when you leave the fate to the hands of the fans.

Fans are fans and many of them might not have a good grasp on reality of what constitutes as a player having a good season. This is what I don’t like about the ASG. It just takes away the opportunity for some players to make it to the game.

Maybe I’m old-school, but I don’t want to make the All-Star Game all about the fans. Especially since these games “mean something” to the playoffs, I would prefer the best of every league to be in it rather than some guy who is very popular.

Can there be a balance of intelligent player selection and allowing the fans to get involved? I think the NFL has it done right.