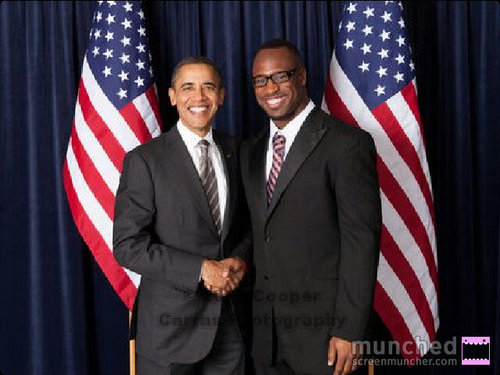 I wouldn’t be surprised if Davis hangs out with the president on a few more occasions later in life.

I covered San Francisco 49ers tight end Vernon Davis for the past three seasons with my work with Examiner.com and every time I think about those years, I always enjoyed every opportunity I had to interview him and see him grow. I’ve become a fan.

On the football field, he has established himself as one of the best tight ends in the game. His blocking ability and his route running continue to improve and his chemistry with quarterback Alex Smith is very special. As a football player, Davis has been a team leader for a few seasons and it’s very apparent a lot of younger players look up to him.

I’m excited to see Davis continue this fantastic career he is putting together and lead the 49ers to a Super Bowl win. He has the tools and the right structure in place to make it happen. I truly believe that he can lead the 49ers to the promised land.

And when Davis decides to call it a career in the NFL, I think that’s where I am going to be more excited for him.

Part of this stems from his career in football. It’s hard not to play favorites when I am trying to be an objective reporter, but whenever there’s an opportunity to talk with Davis, I make sure I get it. To me, Davis ended up being my favorite person to interview.

Davis used to have the “all about me” attitude. But as his transformation into team leader took place under Mike Singletary, I saw that there was more than just a football player in him. Davis understood his role as a leader and made sure he represented the team well.

His interview answers are well thought out and articulate. He speaks clearly, ensuring that all reporters can pick up his voice. And with the 49ers facility located near the San Jose Airport, often outdoor interviews are interrupted by planes arriving into San Jose. Davis pauses and makes sure the plane has passed, allowing all the reporters get what they need for their stories.

But it’s not just the interviews. It’s all the other things that he enjoys doing. Most notably, Davis is a painter. He has done shows displaying his work and even helped out with murals. And it’s always refreshing to see that there’s more to a person than just being a football player.

If you recall a couple years ago, Davis has realized a passion in another sport: curling. Curling may not be very popular here in America, but if you do get a chance to watch it and understand the game, it’s very strategic and compelling. The US team named him honorary captain. His involvement in so many things outside of football shows me that he is set for something special post-retirement.

I don’t think he’s stretching himself thin at all. Despite being involved with so many projects, he still shows up to 49ers camp and does everything he needs to do with his team. He remains in top shape and if this past season is evidence, he’s improving his craft.

One of the things that I was really glad to see last offseason during the lockout was that Davis wasn’t wasting the extra time. He instead went to Africa with several NFL players to help the communities in Uganda and Rwanda.

To me, Davis values his time and opportunity as an NFL player. He’s not wasting it, rather he’s using it to learn and continue to live a full life of so many different adventures. I can only imagine the great things he can do after football.

During this offseason, Davis has been part of President Barack Obama’s campaign for the election. He has dipped his toe into the world of politics, and even the president has taken notice. I wouldn’t be surprised if Davis gets elected to some form of office sometime down the line.

With so much interest in numerous things outside of football, I can only imagine what other things Davis will get involved in. He has the personality (and the smile) that connects so well with people. He is willing to go out and try something new. He’s a well-rounded modern athlete.

This not to say that I don’t want to see him on the football field. I want to still see him perfect his craft as a tight end and bring the 49ers multiple Super Bowls. That’s what I look forward to now.

But when it’s all said and done and after Davis hangs up his cleats, I would love to see where his next passion will take him. He’s come a long way from where he was early on in his career to where he is now.

Davis is destined for great things on the football field and even bigger things outside of the game. What he’s done so far is just a glimpse of the great impact he can make post-football. And when that time comes, it’s going to be fun following his path.