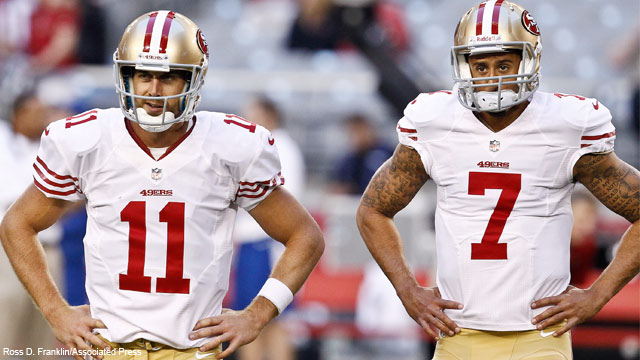 Choose one. But don’t act a fool doing it.

This isn’t a generalization of 49ers fans, but I’ve seen enough of this to have an idea of what a portion of them are thinking.

In my three years as a 49ers beat writer, I got a chance to really see how 49ers think. I grew up a 49ers fan but not in the age of social media where everything can be easily expressed publicly. So for me in those three years, it became a learning experience.

I got a chance to see how these 49ers fans react to certain news and really get an idea of how being a fan has evolved over the years.

So when this “QB controversy” between Alex Smith and Colin Kaepernick arose, it became quite apparent to me that there are just some diehards out there that need to buckle up their seat belts.

There are obvious Smith haters out there. I get it. After seven years of frustration, there is disdain for him. But the constant hate towards him despite winning 20 games in less than two years is baffling.

Maybe there is a fear that he will revert back to his old ways. But isn’t the reason why he hasn’t succeeded is because of the constant change in the coaching staff?

There are also the lovers of Kaepernick just out of the hate of Smith. Or maybe because the backup is a backup. He reminds people of an explosive Steve Young.

Regardless of which quarterback you choose, it seems to me that people are losing their logical minds. And this isn’t just 49ers fans, all fans are like that. The sense of reality escapes them.

The arguments of trying to prove someone wrong when there is no right answer. The failed attempts to belittle one another for the sake of looking smarter than the average bear. The attempts to prove that somehow, someway, their football IQ is just that much better than professional NFL coaches.

It’s a sad trend that has evolved recently. I’m sure it’s always been but with so much information access, it’s really starting to hit me. It’s like they’re yelling at a brick wall and waiting for a response.

Is there a way to stop it? Not likely. This is part of the way sports works. There are the logical fans and there are the crazy fans.

Maybe I’m naive to believe that we are better than this. Or maybe I’m just realizing that these are the people I just don’t understand.