Check out the image on the right. That’s a bag that I got a long time ago after I moved down to Southern California. Since I am not an Angels fan, I modified it and have been using it since. I bring it to many sporting events I go to, including back to Angel Stadium when the Oakland Athletics come into town. While going through the gates, security has never given me any issue about it. But last night, they finally stopped me.

After checking inside my bag (all I had was my glove inside) they looked at the writing and said I couldn’t bring that in. I thought they were joking until they had me move to the side and a second security person looked at it. They told me that they weren’t joking and that the bag could not be brought in.

I suggested that I turn it inside out and they said that would be OK for me to enter.

But how come my bag was not acceptable?

I have heard worse things at games. I have seen worse signs. Is my bag so offensive that somebody’s feelings would get hurt? Is it the word “suck” a word that is too offensive?

Take a look at this sign I saw at the game. Is that less offensive than my bag? 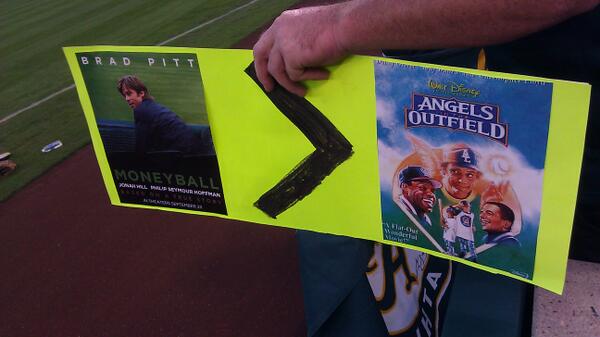 This is OK to bring into the stadium, but not my bag.

I do wonder where we draw the line. Does saying one team suck really cause that much damage? Or are they too sensitive in Anaheim? I’d like to hear your thoughts.