And if you curious how they might look with Fielder on the back: pic.twitter.com/PDo8pd7LKg

Prince Fielder appears to be wearing #84 with the Texas Rangers. This photo was tweeted out and it shows three different jerseys that Fielder will wear with the Rangers: the road gray, the blue alternate and the red alternate.

I didn’t notice this at first but I remembered why I hate the Rangers uniforms so much: it’s the drop shadow. The road gray jersey doesn’t feature that element at all. Compare the above photo tweeted to what new teammate Adrian Beltre has been wearing with the team, apparently the drop shadow has been dropped.

Does that mean the home jersey, which also uses it, will eliminate that too?

EDIT: Confirmed that the drop shadow is also gone from the home jersey.

"I'm just happy to be here, play hard, & win some games." Prince on playing for the Rangers pic.twitter.com/5ltZOTPYjB

Count this as a positive step forward for this team’s uniform design.

And one more thing to take note. They’ve changed the order of the colors on the road gray. From white red blue to red white blue. 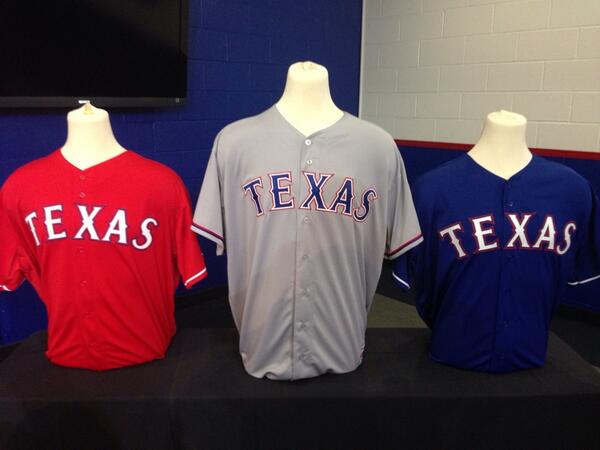 Evan Grant snapped a photo of the front.

You know who benefits the most from this change? The consumer. Authentic jersey pricing with Major League Baseball varies from team to team. Each team’s jerseys price is determined by how much different material is used. Each layer that’s needed to be used for lettering adds on to the price of the jersey.

A classic case of addition with subtraction.