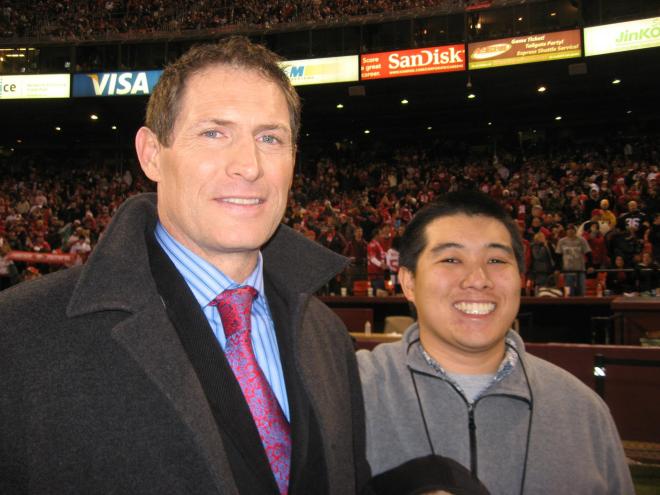 One of my favorite moments ever at Candlestick Park: Meeting Steve Young during the Monday Night Football blackout game.

With today being the final game at Candlestick Park (barring any miraculous seeding occurrence), I am going to try to get to the game today for the last time as a fan. I haven’t bought the tickets yet, so hopefully Craig’s List or one of the online ticket exchange places are nice to me for this hot event.

I remember my first ever football game there was a cold Monday night game. I had been to the stadium before for a couple Giants games, but football was what this stadium was for me. It was against the Lions. The parking lot was soaked with water from the rain earlier in the day.

I actually don’t remember much from that game except for a long Barry Sanders run. I got to see Hall of Famers Sanders, Steve Young and Jerry Rice play. Terrell Owens was a young cat finding his niche. It was my first ever NFL game. It was awesome.

I’m going to miss the place. I actually only got to go to The Stick only two more times since then as a fan. One time to see the Eagles play and another time to see Brett and the Jets. 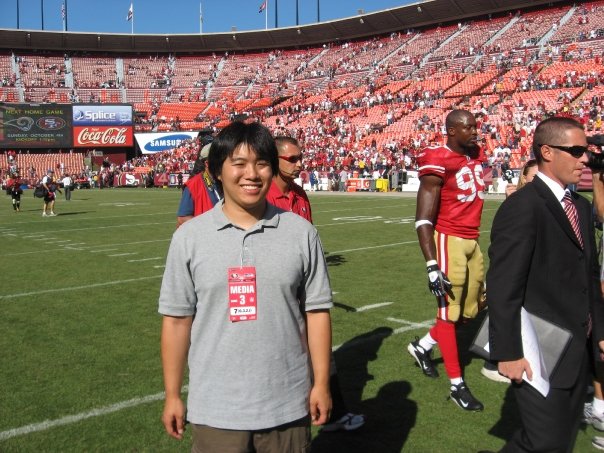 My first game as a writer covering the 49ers. I had no idea that this would be the start of a big change in my career.

Following that, it was all business. I became a 49ers beat writer in 2009 and my attendance to the games was all work. All in all, I’ve attended about 30 different NFL games at this place.

I got a chance to meet a great handful of Bay Area writers that I am proud to have learned so much from. I also got a chance to see the team I grew up watching in a different light. I saw 49ers players (and opposing players) in the locker room after games. I got on the field access. I got to meet Hall of Famers in person. It was a blast for me.

The Stick wasn’t a great stadium. The elevators in the press box was never the best thing to get to and from places. The weather wasn’t ideal either. But the memories of this place will live in me forever.

I got to see great games, future Hall of Famers up close and personal. I was there for Vernon Post. I was still a little kid doing a big man’s job.

Will I miss this place? Sure. But I am glad that the team gets a nicer stadium.

But for me, I will always remember how much this place helped build the foundation for my career. And I know for so many others, it holds a special place in their heart too.

I say farewell to you, Candlestick. You weren’t the best place to go to and the traffic was horrible. But you were home. You taught me things I never would have experienced as a fan and as a writer. You allowed me to get where I am today. Candlestick was my home.

So tonight, as I hope to find a way to get tickets to the game, I want to say thank you and farewell one more time. Let’s go out with a bang, for old time’s sake.

Now for a fun farewell video: