Update made to post added towards end of entry.

On Wednesday, the 49ers announced that they would unveil a new alternate uniform during the draft. Ladies and gentleman, here it is via their new Snapchat. After some speculation on Wednesday, a black uniform was suspected and this is what we have.

This new jersey appears to be a simply recolored version of the team’s standard uniform. Essentially, the 49ers have taken the base of their white jersey and made that black. The red numbers, names and stripes remain. Considering that the team’s logo features black and nowhere else on the standard uniform uses black, this seems to be an odd choice. But given the trend of what alternate uniforms look like in the NFL (and the popularity of black jerseys), this was the only logical direction. A gold alt would have been too difficult to mass produce and it would not look great with the team’s current gold (more like khaki) pants. But they added a gold Nike swoosh on the sleeves. So there’s that for color diversifying.

Adding a black jersey will diversify and grow the potential merchandising opportunities. The team did not go with adding a different red jersey. They went with a new color, which will be a hot sell no doubt among fans. The 49ers have never worn an alternate in their entire team history. They have worn throwbacks, but alternates are made specifically with the intent to have a different option during the seasons (along with the merchandise sales). Per NFL rules, alternates can be worn a maximum of two times during the regular season.

The Snapchat did not reveal what color the new pants will be. My estimation is that they won’t add any new pants and will stick with their khaki pants with this new jersey.

Via this thread on Chris Creamer’s site, the 49ers also have black pants. 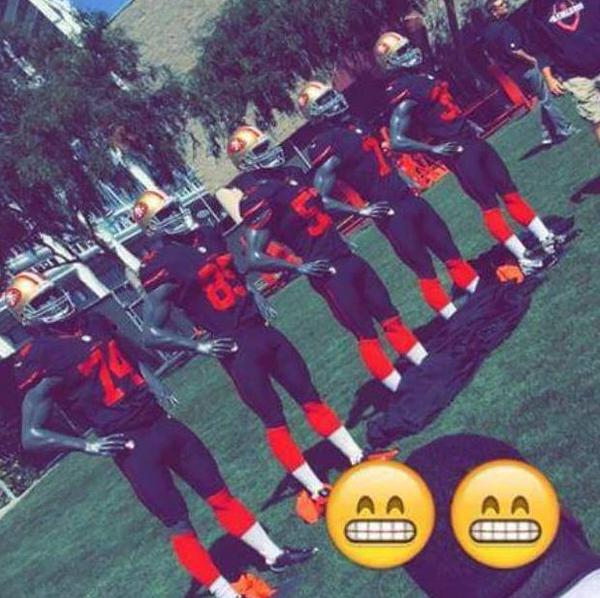 The black pants appear to be just that with two red stripes down the side. No white. No gold. That means the black jersey is designed to be worn with these black pants. However, that doesn’t mean the 49ers can’t mix and match. There are no rules against how many times a team can wear certain pants throughout the season. We could red jersey with black pants.

Overall, this new look would work great for a brand new team. But for a 49ers team that has kept a very simple look for the most part of their history, this addition seems too much. Pairing this entire look with the current helmet, it’s a cluster of a potentially good idea but due to limitations, has no chance of being executed well.

What do you all think of this new 49ers look?