The Decision was what everyone was talking about. The selfish, attention-grabbing move was James’ attempt to make himself bigger than the game. It was horrible. I will never ever forget it.

Now James has decided that after four seasons with the Miami Heat, he will opt out of his contract and be a free agent again. Will he pull another stunt like this? I doubt it. He’s learned his lesson. But instead now we wonder where he will play.

END_OF_DOCUMENT_TOKEN_TO_BE_REPLACED

LeBron James is the best player in his sport. He makes a ton of money in endorsements. He is making $19M for this season.

He’s an international icon. He’s a millionaire. He’s on top of the world. Yet when he found out about Miguel Cabrera’s big new contract, James got jelly.

END_OF_DOCUMENT_TOKEN_TO_BE_REPLACED 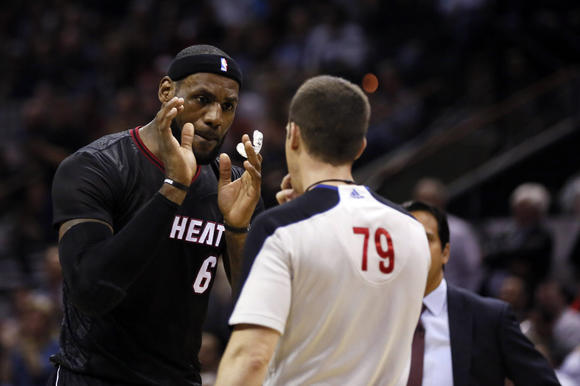 “I don’t want the wear sleeves!”

There have been multiple players that have complained about the NBA jerseys with sleeves. LeBron James has talked about it before but last night, after a 19-point performance and loss against the Spurs, spoke up against it again.

“I’m not making excuses, but I’m not a big fan of the jerseys. Every time I shoot it feels like it’s just pulling right up underneath my arm. I already don’t have much room for error on my jump shot. It’s definitely not a good thing.”

When will the NBA and Adidas listen? The gimmick is terrible and unnecessary. But they continue to roll them out, thinking that it’s accepted by fans.

Until they do so, players will continue to complain about it. They’ll find an excuse to blame it. Athletes are creatures of habit and disrupting their feel when wearing a jersey is a big no-no. Shame on you, NBA and Adidas.

This is what I was thinking would happen and now it has. LeBron was growing too strong and powerful with the black mask. Back to the clear one!

Last night LeBron James wore a mask for the first time since breaking his nose. Unlike the one that Richard Hamilton wore, this one was all black like the Kobe Bryant design.

But look at this one that James is wearing. It’s like some kind of carbon fiber material and it looks really menacing. In fact, it looks downright frightening. A lot different than the mask he wore in Cleveland.

I remember when Dwyane Wade wore a band-aid and it became a fashion statement, even though his wound had already healed. With James and Wade on the same team, is there a chance that they find a way to get creative and make this mask full of design? That’s where it could end up being. The biggest star on the planet has a chance to influence people in a way like never before.

Of course the commissioner can just say no to all of this and it’s OK. But knowing James, he’ll likely seriously consider something like that.

Maybe kids will buy masks to wear when playing pick up ball. Who knows?

OK, the above photo is pretty cool if you understand the significance of it.

Last night, the Heat and Nets wore nicknames on their jerseys. It’s not the first time the NBA has done this, but it’s the first time where every player had a nickname. I actually don’t mind it at all. It doesn’t ruin the aesthetics of the uniforms and it adds a little fun.

The only problem, however, is that not everyone has a nickname. Some just seemed so forced. But overall, it’s a fine promotion and it apparently is happening a couple more times this season. Let’s just keep it at that. No need to continue to drag this out.

END_OF_DOCUMENT_TOKEN_TO_BE_REPLACED

The NBA was rumored to have a few dates set where players would have their nicknames on their jersey. Via Spike Lee’s Instagram, that rumor has been confirmed as he tweeted Ray Allen’s jersey.

I had been loathing this even though this isn’t a new idea for the league. The problem with this is that back in the 1970s, the promotion of the league wasn’t individual based and full of ego. In today’s NBA, you watch not for the team, but for the individual player. It’s a team sport but it hasn’t been promoted as so. This just confirms it.

END_OF_DOCUMENT_TOKEN_TO_BE_REPLACED

.@PhilHecken @UniWatch @darrenrovell here's a look at the remainder of the NBA's sleeved unis for this season. pic.twitter.com/WwgFeppiOg

Yes, NBA and Adidas. Please tell me how these are great designs for a basketball uniform! It is so great to see something so innovative in a sport that demands something like this.

Oh Adidas, you are one of a kind.

My goodness these are horrible.

END_OF_DOCUMENT_TOKEN_TO_BE_REPLACED

The NBA may ask the Heat and Nets to use nicknames on their jerseys for a regular-season game: http://t.co/uUhT0eES8e

So let’s get this straight: An official game-used jersey could read “King James” for LeBron James. That’s not too crazy. In fact, with this marketing and globalization of the NBA, it’s actually a smart marketing tool. I am not surprised by this at all.

And as you can see by the photo to the right, the NBA has done it before too. It’s pretty fun and it really embraces the individuality of the players in the NBA. And the NBA is the most individual, self-promoting professional league in sports anyway.

I prefer they didn’t, but for one game, I am not against it.

Even though I hate the Heat, I hope Oden doesn’t hurt himself again. He deserves better than what has happened to him so far.

Cue the fun video of his once promising career!