“The most exciting finish in the history of college football!”

Be one of the first 10,000 fans and receive The Play Bobblehead.

All Bay Area fans know this. All Cal fans love this. I want this.

What a great bobblehead to commemorate the craziest play in college football.

Help me get one! 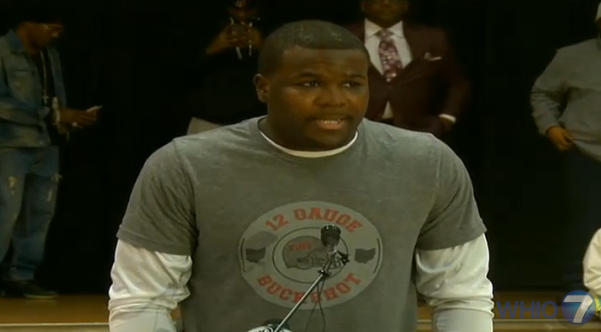 So earlier in the day, Cardale Jones tweeted this.

Some speculated that he would announce his entry into the NFL Draft. Some hoped that he’d stay at Ohio State. His stock is really high so leaving for the pros made sense. He then held a nationally televised press conference for his announcement.

#CardaleJones will announce he will enter #NFLDraft #OSU

END_OF_DOCUMENT_TOKEN_TO_BE_REPLACED

After letting the events of last night sink in, I can now fully appreciate the beauty of this new playoff system. If we were still under the BCS rules, Ohio State wouldn’t be champions. In fact, they wouldn’t even have a chance at the title. This is what I think the college game needed and we got a great taste of why it was a success.

One of the things that makes college football’s new system great is the chance for teams to prove that they are deserving of a title shot despite not being ranked at the top. I wonder if the playoff will expand in the future. But for now, we got a great glimpse of what goodness can come.

Ohio State proved to me that their defense was phenomenal and their running game controlled the entire tempo. I am was thoroughly impressed with Cardale Jones and his poise despite his lack of prior playing time. The Oregon offense never got a chance to get into a good tempo and as a result they just look baffled on the field. Even though it wasn’t that close, I was hooked watching this game and I know that a part of it was because I witnessed the two games on New Year’s Day and wanted to see its conclusion.

Good job, NCAA. You got something right. Now don’t mess it up going forward.

The U left Nike to sign with Adidas and Snoop Dogg may have given us a glimpse of what their new jerseys could look like. They look terrible.

I know Snoop has brand loyalty to Adidas, but he seriously can’t think this is good looking, right? 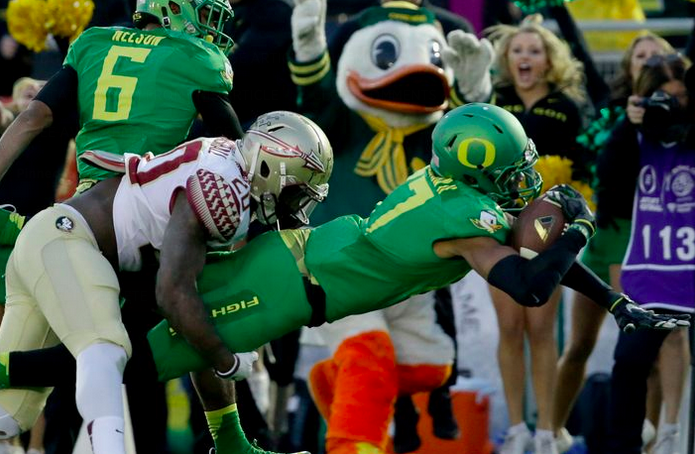 END_OF_DOCUMENT_TOKEN_TO_BE_REPLACED

Last night the Seahawks ran a play that looked really similar to something we’ve seen. The Auburn Tigers posted this to remind everyone where the read option pass play came from.

Following the game, Pete Carroll acknowledged the origin of the play.

“We’ll go anywhere to find a play,” the Seattle coach said afterward. “And that one-uh, Muschamp at Florida, no … Auburn. They ran it. Give Gus Malzahn credit. That’s a great play. I kept telling them [the offensive staff and players] this summer, ‘It’ll work, it’ll work.’ But it didn’t work all summer.”

Great play. Surprised that it’s taken this long for teams to full embrace plays that succeed in the college game.

Soak it in, Seminoles. pic.twitter.com/v8fF09GeWa

Farewell, BCS. You weren’t a great system and at times, we questioned why you exist. But you gave us great games. The BCS Championship game we just witnessed was an amazing game. Texas-USC was amazing. The Rose Bowl this year was fun. Boise State’s upset was phenomenal.

But it’s time for you to go. I bid farewell, but I also thank you for the good and bad times. We learned a lot and had a lot of fun watching these games.

To the new playoff system, we expect great things. This is why we love college football.

Farewell and thank you. 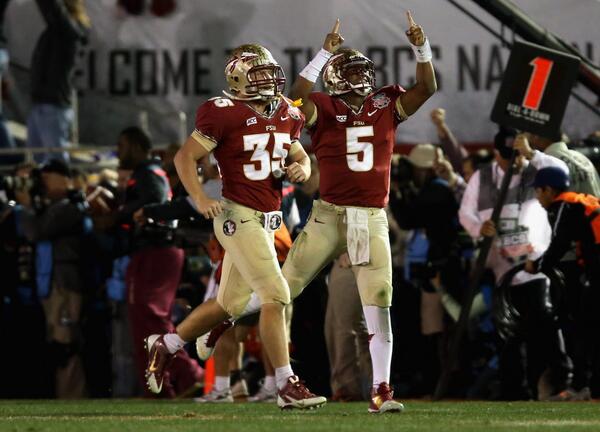 I didn’t do it last year mainly because I didn’t really think about it. Plus I was already so excited about the parade that I just let it be. However this year, I knew that I had to go to it. Especially since I grew up a Cal fan and have a soft spot for Michigan State sports, it was a game I had to attend.

Following the parade, I decided to drive to the Rose Bowl. I didn’t have a ticket and I didn’t even know if I could go in. I was told that I could just show up to the parking lot and mingle with people and maybe someone would sell me a ticket. I should have done that.

END_OF_DOCUMENT_TOKEN_TO_BE_REPLACED

One year ago today. I was there. What a great time. Great memories!

To relive them, here’s the tag I used during my trip last year.

Props should be given to Auburn for being heads up on the final play to win the game. But the same cannot be said for Alabama. In fact, it’s very embarrassing that they let it happened.

It just seemed like the entire special teams, save for maybe one or two players, were ready for a potential return on a missed kick. In fact, most times when it comes to a ball fielded that deep into the end zone, the returner doesn’t get past the 30-yard line.

But it was great blocking on Auburn’s part and the delayed reaction by Alabama really took away from this ending for me. It was a thrilling ending, but it came in part because one team just wasn’t ready. That’s a shame.