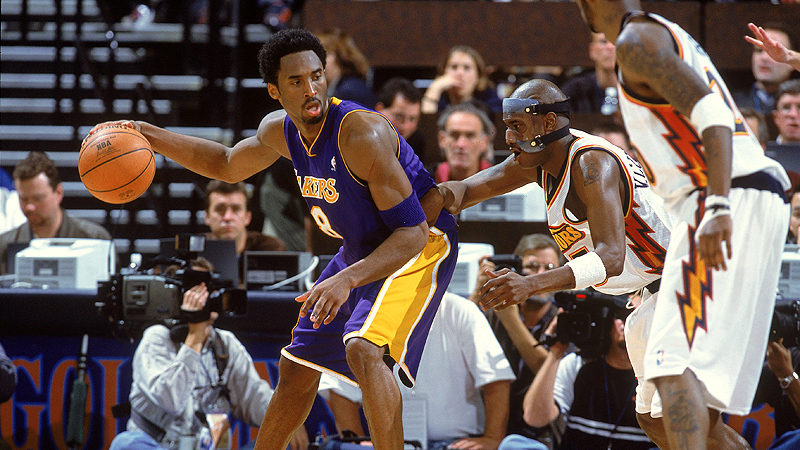 END_OF_DOCUMENT_TOKEN_TO_BE_REPLACED

This news didn’t come as a surprise as we saw Kobe Bryant fall apart and become a bandaged player that he once was. His shots were falling short and his mobility was limited. He has given his body everything he could in 20 years of basketball and this has become a sad ending to a storied career.

But I don’t care.

As much as I know and understand how great of a basketball player he is, I honestly don’t have any feelings toward this news or anything else right. I knew it was sad when his decline began a few years ago, but now it just feels like it’s been dragged out.

Growing up in the Bay Area as a Warriors fan, perception of basketball was different than the rest of the world. I wasn’t used to seeing my team win. I wasn’t used to seeing great superstars come through Oakland and staying. I didn’t think my team was good enough and they weren’t. I always had to look up at the Lakers and see them winning all the time and I didn’t like it. And Kobe Bryant was a big part of that. So in an essence, I didn’t like him. END_OF_DOCUMENT_TOKEN_TO_BE_REPLACED

Fan voting is stupid. Kobe Bryant is not an all-star because he barely played this year. It’s logic. Fan voting, however, doesn’t allow logic to shine.

Kobe Bryant was voted a starter in this year’s All-Star game, and agreed with the legions of people complaining about it.

“There are guys that have been out there playing extremely hard all year long,” Bryant said in a brief interview clip that aired on TNT during the Lakers’ Thursday night game against the Miami Heat. “Players that are very deserving of being in the All-Star game that I think should be out there playing.”

Even if Bryant wanted to play, there’s no guarantee that he would be back by February 16 from the leg injury that has sidelined him since December. If he was healthy enough to play, there would be no reason for him to risk injury in a meaningless game.

Bryant is absolutely right on this one.

Riley Cooper got racist at a concert.

Earlier this summer, Riley Cooper was at a Kenny Chesney concert. What appears to be an act of frustration for not getting backstage passes, the above incident happened and was recorded. (And it doesn’t help the stereotype of rednecks who love country music.)

The video surfaced around today about a month since the incident and the backlash has been intense. Cooper in his anger to what was reportedly a security guard is unacceptable and saying “I will fight every n***** here” is just not right.

Since then, he’s apologized on Twitter and spoken to the media. on it. The team has also fined him.

END_OF_DOCUMENT_TOKEN_TO_BE_REPLACED

Earlier in the day, Kobe Bryant announced that he would have an announcement. Some speculated that he would announce his retirement, but it actually ended up that he was partnering with a non-profit organization.

But of course, if one fake account makes you believe it to be true, then people will believe it. That forced Bryant to come out and debunk those rumors.

Don’t be a fool. Not everything on the Internet is true.

The Lakers say that Kobe Bryant tore his Achilles. Bryant himself believes that too. It’s the kind of injury that can sideline a player for over a year. Nobody comes back from the injury the same as they once was before.

I am not a Lakers fans and I can’t stand anything associated with the team. But I know basketball and I respect talented players when I see them. That’s Bryant. Despite his selfish ways and his arrogance, it’s part of what makes him a basketball player you just have to watch. He has been so great for so long that you would think that he could play on forever.

But with this injury, it appears that his days as a Laker could be over. His days in the NBA could be on the same boat.

END_OF_DOCUMENT_TOKEN_TO_BE_REPLACED

Space-themed Kevin Durant shoes with a subtle star and #35.

Check this out. Nike unveiled the shoes that LeBron James, Kobe Bryant and Kevin Durant will be wearing for the All-Star game that nobody really cares about.

As is customary for many All-Stars, the game is a showcase of new footwear for the consumers. Nike has taken the idea of space travel (the game is played in Houston) and given these three players shoes to reflect that.

CHECK OUT THE GALLERY ON NIKE’S SITE

END_OF_DOCUMENT_TOKEN_TO_BE_REPLACED

A news report came out that there was a locker room feud and they decided to mock it. Both Dwight Howard and Kobe Bryant went to Twitter to post the exact photo of them pretending to fight, disputing the claim that they are having issues.

I don’t know about you, even though it’s a good idea to dispute a report, putting up a picture like this to me of a mask of real problems. The Lakers are not meeting expectations and are not in the playoff hunt. Taking jabs at the media instead of playing better basketball sure looks like a team with no direction.

Last night was a very interesting night in terms of racism. Or was it real racism? I can’t really tell since I am not sure what is considered racist or not anymore.

As you can see from the above clip, Shaquille O’Neal decided to call David Lee the “White Chris Webber” and everyone has a laugh. But I started to think about why it was OK to laugh at it. Is it OK to bring up Lee’s skin in bringing up a nickname? If I played basketball, I wouldn’t want to be called the “Yellow Chris Webber” or anything like that. I would find that racist.

END_OF_DOCUMENT_TOKEN_TO_BE_REPLACED

Kobe is going to save Gotham City after the game.

Since his broken nose, concussion from the All-Star Game, Kobe Bryant has been wearing a protective mask during games. But according to Larry Brown Sports, Bryant has decided to go away from the clear mask and go for the Batman look. (He only wore it for one quarter for the game against Detroit before going back to his old mask.)

I had always thought that the masks had to be clear, but apparently it’s OK to have a black one. I am just afraid that if the league starts giving more leeway to these kinds of things, then these masks will start featuring company logos.