Here’s a look at the new Madden’s gameplay. And it’s also playing in the new Levi’s Stadium.

As a guy who has played the new Madden every single year since 2005, this is really neat. I didn’t like that the details on Kaepernick didn’t feature the tattoos. But now, this is really cool.

Now that is realistic.

In the last 10 years, the Madden simulation is 8-2. Not bad. And this year’s simulation gave us a classic. If this is how the Super Bowl goes down, it might be the greatest game ever.

OK, maybe not. But it will be pretty close. 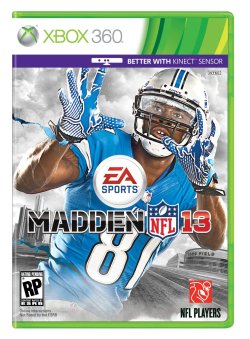 Pretty good cover, but Megatron is too up close.

I love playing Madden I think I’ve bought and played almost every Madden that has been released. I’m not one of those crazy guys that believe that the curse is real, but I do think that the string of unfortunate injuries is a very strange coincidence.

But looking at the newest cover with Calvin Johnson, for the most part I think it’s not too bad. The image with the background captures the hard-working attitude of Detroit. It’s pretty simple and I like it.

CHECK OUT ALL THE MADDEN COVERS EVER RELEASED

But one thing I really don’t know about is the fact that it seems real up close. In previous covers, you get at least most of the players’ body up to the knees. But with this one, it’s just the top half of Johnson’s body.

Maybe it’s to show off the new Nike gear, but I think they could have zoomed out a little bit. Not really sure if I want to see Johnson’s teeth that up close. But it’s just a minor thing. I can’t wait to play this game.