Last night was a special night for me. And for Major League Baseball. After not being able to have fans in attendance all of last year except for a few postseason games, the league is back in full swing with fans being able to attend games in limited capacity. Except for you Texas Rangers. Shame on you.

The COVID-19 pandemic hit across the United States and all of Major League Baseball in early spring last year and the league had to shut down everything. It was only months later into the summer did the league begin playing games. No fans in attendance and my hopes of attending a big league game that season was dashed.

I usually find myself in Oakland for a handful of games every year to see my hometown A’s. Since moving to Los Angeles, being able to attend games at the Coliseum has been challenging but I have found ways to fly or drive back home. The team didn’t allow any fans in attendance at all last season, opting for cardboard cutouts among other silly gimmicks. But this season, they’re letting fans in at a limited capacity (20 percent) and I knew immediately I wanted to be in attendance for that first game. I booked my flight and bought my ticket to Opening Day in Oakland. I had to be there.

This will be my first live sporting event since a Warriors game in San Francisco last January. The pandemic took away any other chances of me attending any other sporting events since then. But now a little bit over a year later, I am back at one of my favorite places ever.

The Coliseum site itself has been a vaccination site in recent months and now it’s welcoming fans back for a live event. I wanted to document everything about my experience in my first game back. I wanted to see what was different now than what it was like in 2019, the last season the team was able to have fans in attendance. Here’s what I saw.

END_OF_DOCUMENT_TOKEN_TO_BE_REPLACED

I like the beginning of the MLB season. There is so much hope in the air. I know that there are teams with high expectations and some teams that aren’t going to be serious playoff contenders. But the opening of spring is like a chance at new life. Everyone has hopes of something big.

Opening day would be a great national holiday. At least for a baseball junkie like me, I would love that. Still, I will watch as much baseball as I can today and enjoy the first games of the season. It’s going to be fun.

(*I’m bummed out I couldn’t make it to Oakland for the opener today. I made the last five but this year, I just couldn’t make the time for it.)

So the A’s have lost 10 straight Opening Day games.

This came in part due to key players with hitless nights. This comes also with a player that somehow continues to find his way onto the roster with a base-running blunder. This comes with the new closer losing the game.

Another tough loss. It was a great atmosphere. The rain stopped at just the right time and it never rained throughout the game. The crowd was into it and the matchup was fun. The first eight innings felt like a playoff game. But of course, the A’s didn’t win and I go home sad for the fifth straight opening day.

What a terrible feeling, but I still remain optimistic in this team. It just sucks that they can’t get these big wins in front of the home crowd. What a bummer.

The introduction and ceremony was a great sight.

As you are reading this, I am driving from LA to Oakland. It’s probably raining so I have to be careful. But the drive is worth it. I haven’t missed Opening Day in five years.

It’s an exciting day for me. This is when baseball season for me starts, a chance to see the potential beginning of another magical season.

The expectations are high for this team and I want to remain optimistic. And that’s what Opening Day is. Every fan can have that optimism, that there could be something amazing in the future. It may not mean a World Series win or even a third place finish, but Opening Day is a day of hope.

EDIT: We have an explanation.

@SamuelYLam @NewEraCap This was just how our batch of hats were created originally before they switched them back to the traditional side.

END_OF_DOCUMENT_TOKEN_TO_BE_REPLACED

The classic walkway to the Coliseum.

Another Opening Day and another one I make. Since I live in Los Angeles, it’s a little harder for me to be back in the Bay for certain things. But Opening Day was one event I couldn’t miss. I found my way back to Oakland and it was going to be a great celebration.

The day started off with me watching other teams start their season through my MLB.TV app on my phone. Good stuff. It got me juiced up for the entire day. I couldn’t wait to get to Oakland!

END_OF_DOCUMENT_TOKEN_TO_BE_REPLACED

Happy April Fools Day! It's the unofficial holiday for Fools!

I did not see the Kevin Ware injury live. I was on a bus but as I was scrolling through Twitter, I had never seen the Twitterverse react to an injury like that before. I was curious about it and wanted to see what happened.

Unfortunately, it was one of those things where it was being debated whether or not a replay should be shown. Eventually, I did see it moments later and I nearly vomited on the bus.

END_OF_DOCUMENT_TOKEN_TO_BE_REPLACED 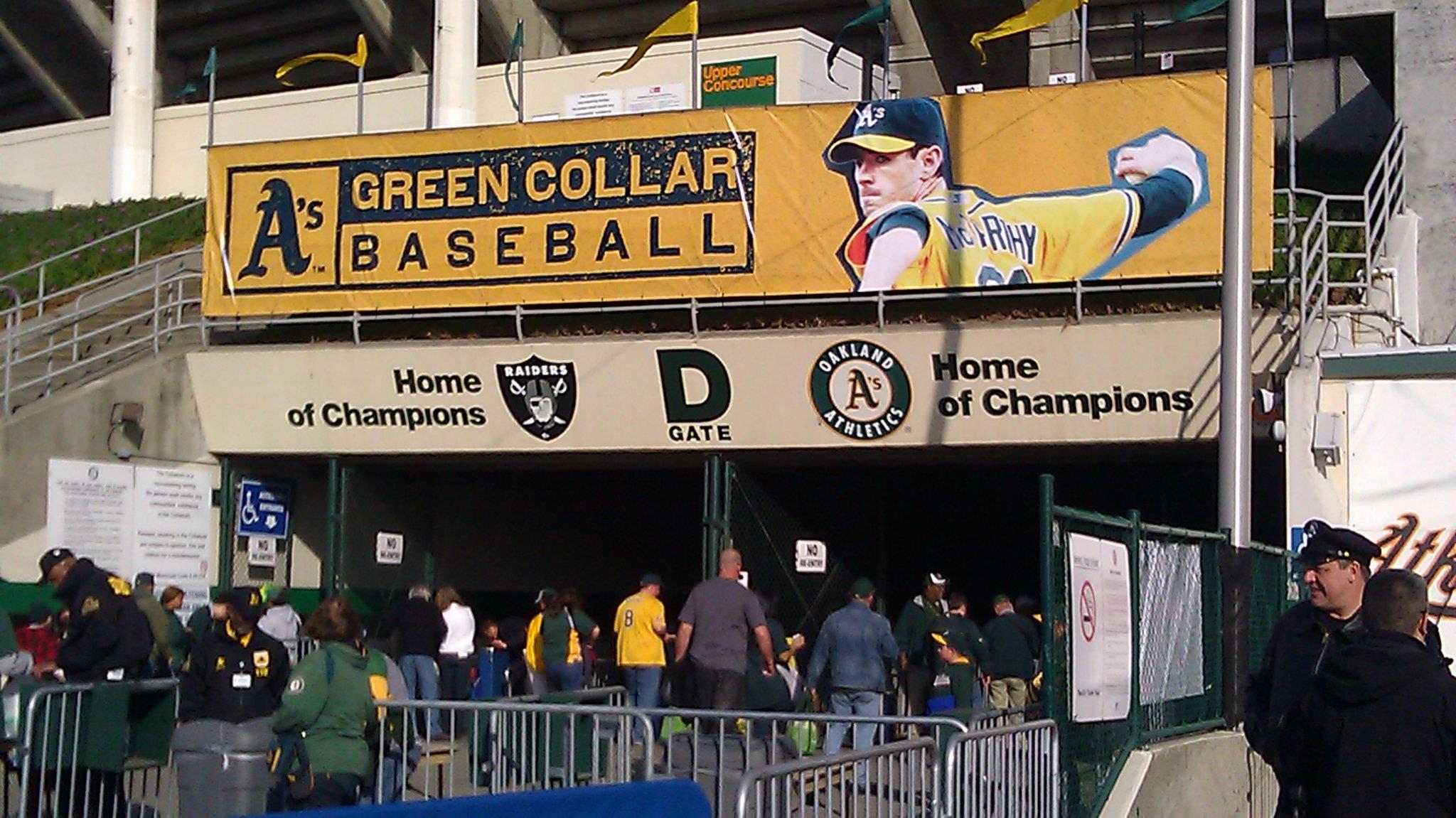 The entrance to my summer home.

Aside from the final score, everything that led up to Opening Day for me was a blast. Since I am a huge Oakland A’s fan, returning to the Coliseum to me was something that I always looked forward to. Even though the stadium is a dump, I have spent a lot of my life at this ballpark and there was no other place I rather be.

I got there a little before 6PM and fans were already filing into the stadium. I walked through the parking lot and just absorbed the scent of all the tailgaters. And just standing outside the stadium, I knew that I was where I belonged.

One the things that I love to do is just to walk around and observe things. It’s always nice to see what new things have been added to the place and just the reaction of people coming in and seeing baseball for the first time this year.

END_OF_DOCUMENT_TOKEN_TO_BE_REPLACED

As you are reading this, I am already on my way to the Coliseum to celebrate Opening Day. I know that the team already played two regular season games but nothing beats the first home game of the season.

Baseball has always been my favorite sport and the A’s have become my biggest passion. I don’t get this emotional about any other team or sport. This is pretty important to me.

So now as I tailgate in the parking lot, eating up hot dogs and drinking up beers, I am just happy that I am back at the Coliseum where I belong to celebrate another season of baseball.

It doesn’t get any better than this. Let’s go A’s!

Wait a minute. Wasn’t last week Opening Day? The A’s and Mariners played the first regular season games in Japan so that must be it, right?

No? You mean today is Opening Day? The one-game series in Miami between the Marlins and Cardinals? I’m confused.

So what does that make Friday? Most teams are playing that day. That’s Opening Day?

I know MLB is really doing its best to expand and try to make their games primetime or whatever, but Opening Day is a tradition in baseball and it should remain as simple as possible. Opening Day (not Opening Weekend, or Opening Night) to me should be on a Monday day game for all teams.

I know TV ratings and revenue play into it, but I really don’t like how different teams are opening their season at different dates and in different countries. Can we get it right?