Here are 10 thoughts after watching the Week 1 games from Sunday. (Yes, I know I am not the first person to do something like this. Oh well.) 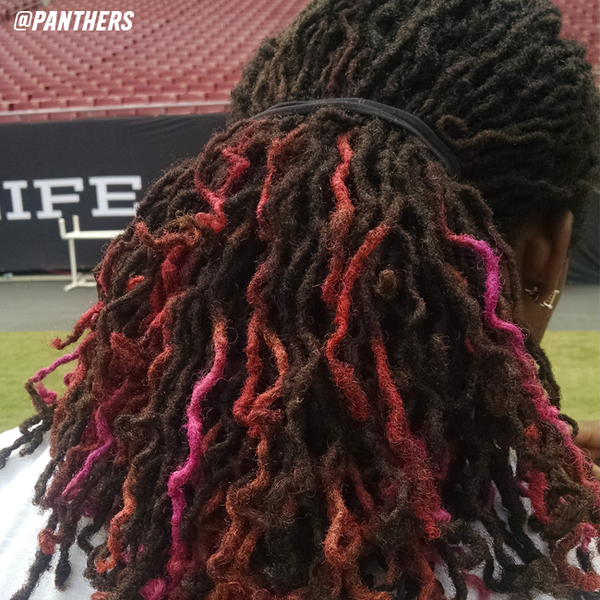 Very nice tribute from DeAngelo Williams for his late mother who died from breast cancer in May.

1– DeAngelo Williams dyes hair pink and paints toe nails pink to honor mom who died of breast cancer in May. He also wore cleats with pink spikes. The NFL already has a month dedicated to breast cancer awareness in October. However, it’s kind of a tough situation. Teams are not required, but pretty much told to adorn pink everywhere for the month. It’s too much. It feels forced. It’s a good thing but it’s still kind of a tough visual.

But for players who have actually been impacted by it, something like this is much better. It’s subtle, but effective and it means more. I remember in 2011 then 49ers running back Anthony Dixon wanted to dye his hair pink for breast cancer awareness but it didn’t go well and it went blonde. These kinds of acts are much more effective than a month-wide pinkfest. Granted awareness is stronger when everyone does it, but the personal ones are the ones that mean more. Props to DeAngelo for keeping it simple and classy. Also, check out his essay on it after his mom passed.

2– Tony Romo played horrible. And that led to an easy win for the 49ers. That’s a great way for a team that didn’t look hot in the preseason. The 49ers got their scoring early and cruised to the win. I think the offense is going to be fine and for the most part, the defense looked good. Keep an eye out for how the running game is handled going forward. Frank Gore is still the man but Carlos Hyde appears to be on his way to getting a lot more snaps.

Also, Michael Crabtree grew up in the Dallas area and grew up a Cowboys fan. This must explain his footwear decision on Sunday (here’s details on it) which will draw a fine.

I am so glad these NFL games employ photographers to document the action. #BrownsGonnaBrowns pic.twitter.com/D3JBpzh6fT

Don’t sleep on the Steelers. Last year they struggled but I think that the team could return to the playoffs and possibly win the North. The running game of Le’Veon Bell showed up on Sunday and I was impressed. I also think that Ben Roethlisberger can still be very effective if he can stay healthy. Markus Wheaton is one player I would like to keep an eye on this year. He will stretch the field for this offense that is pass-favorable.

Also, did you see the Brown on Brown crime? It’s just glorious in all its ways. I don’t even think that it was worth a penalty for unnecessary roughness. Antonio Brown just tried to make a leap and this happened. Just let it happen.

4– Broncos showed that their offense is extremely powerful still. The Colts showed that Andrew Luck can engineer almost any comeback possible. Well, that stuff we knew but it was proven to us once again. What I found most impressive about the Broncos offense is that even without Wes Welker, they can operate. Big props to Emmanuel Sanders for stepping right in and becoming an effective piece to the gameplan. I look forward to seeing how he will do when Welker does return.

The Broncos defense looked pretty good for most of the night. But of course, the story is Andrew Luck and his ability to take a deficit and nearly complete the comeback. Never count out the Colts, ever, with Luck under center. That’s some Hall of Fame talent he has right there.

5– The Jaguars can only get better. Jumping to an early 17-0 lead thanks to Nick Foles’ butterfingers and the emergence of Allen Hurns was a great sight to behold. Chad Henne is the rightful starting quarterback and it’s best that the team sticks him under center while Blake Bortles learns. The team is still rebuilding but this first half start is a great early sign of how good this team can be.

On the other hand, the Eagles are a good team and once they realized how good they can be, they scored 34-straight points and Nick Foles finally got back into his groove. I expect the Eagles to take this Week 1 win as a reminder that they need to start off stronger and not have to frantically try to come back like this. Both teams are going in the right direction.

SIDE NOTE: Because Nike is having trouble reproducing the shade of green for the Eagles uniforms, they had to wear all white for this game. The Eagles had been outsourcing the manufacturing of their uniforms to another company (I believe it was Ripon) and official NFL providers like Nike and Reebok have just been slapping their logos on the uniforms. It’s kind of embarrassing. The Eagles are expected to stop wearing the all white look into Week 6, although we will see if it will be ready by then.

SIDE NOTE 2: Seven teams (TB, DAL, PHI, NYJ, BAL, HOU, MIA) wore white at home. I am not sure if that’s some kind of record but I can bet it’d be close if there was such a tracker that keeps tabs on these things. The Florida teams usually wear white at home in September to combat heat. Houston always wears all white in season opener home games and Dallas just does it always.

6– Both the Jets and Raiders did not play well at all. Geno Smith is still so raw and it showed that he still needs some seasoning. But the Raiders on the other hand have a young, talented rookie Derek Carr that still has to take his bumps. Both teams aren’t playoff teams in any estimation but their Sunday matchup showed that they have some potential this year. It all comes down to quarterback play and how quickly both Smith and Carr can adapt and mature.

7– Tom Brady and the Patriots are going to be a head-scratcher this year. They have the talent. They have the intelligence. This team should win the East with ease. But their play against the Miami Dolphins is a little concerning. The defense allowed Knowshon Moreno to have a field day and the Dolphins offense seemed to be in rhythm all game. This doesn’t bode well for the Patiots whose offensive attack is passable, but isn’t as strong as it once was. The outside receivers are still raw and Danny Amendola can only carry the load so much before he might get hurt again.

Expect the running game to be a lot more of a factor down the line. The Patriots shouldn’t be panicking yet, but watch out for the Dolphins. They have a running game that can keep them in the pack of the division race.

8– Matt Ryan has his weapons back healthy. Even without Tony Gonzalez, Roddy White and Julio Jones will be huge for the Falcons’ return to the playoffs. The offense, especially Ryan’s arm, kept the Falcons on pace with the Saints. The Saints are the Saints and they looked fine. Darren Sproles is gone, which means that Mark Ingram must carry all the major responsibilities of the running game. He proved just that and Khiry Robinson also chipped in. I expect these two to be battling it out down the stretch for the division title. Both offenses are dangerous. Just hold on to the ball.

9– The Chiefs aren’t a good team. The offense can be explosive but it’s tough with a limited aerial arsenal. Jamaal Charles has to carry a lot of the load for the team and he didn’t show up today. And it doesn’t help that the defense kind of overachieved last year and this year, they lost both Derrick Johnson and Mike DeVito to Achilles injuries. This offense can still get it going and the defense is still good enough, but now we get the chance to see how good Andy Reid is as a coach with a team that has a lot of pressure to repeat last year’s success.

10– J.J. Watt is a beast. I hope that Jadeveon Clowney’s injury isn’t serious, although it could mean he might be out for a couple months. What a shame. The Houston defense looked real strong. But then again, the Redksins offense wasn’t really all that. They had their moments but didn’t show signs of being explosive. I wonder how much they are going to limit Robert Griffin III or just let him be the quarterback he wants to be. DeSean Jackson didn’t do much either. Not a good start for the Redskins.

I am actually really excited to see the nightcap of the Monday Night Football doubleheader. San Diego and Arizona are two teams that are not elite, but are both good enough to possibly get 10 wins each this year. Arizona’s defensive front is a little weaker this year but their secondary is amazingly still impressive. The offensive mind that Bruce Arians brings to that talented core should be fun to watch.

On the other side, the Chargers are playing with Philip Rivers in what I think could be a career season for him. The running game looks much improved and Antonio Gates still has a lot to prove. Keenan Allen is a major stud and should shine even brighter this year. Judging by the toughness and tenacity of these two teams, now entering their second year with their new systems, I expect this to be a huge slugfest. I am labeling these two teams as Wild Card teams, but in any other division, they could be division leaders.

Enjoy your Monday games and let’s hope for some more excitement.

And if you want some more NFL, chew on these stats:

Via @EliasSports: A player you had likely never heard of made NFL history yesterday. A full review of Sunday… http://t.co/pIoR0vd4ji