#Athletics Drumbeat: Much more on end of affiliation with @RiverCats, plus other Triple-A affiliate openings in PCL: http://t.co/cGa8ceuFnW

The Sacramento River Cats are ending their ties with the Oakland Athletics. The Triple-A team had been with the A’s for 15 years. It is believed that the popularity of the San Francisco Giants and their fan base would be better than what the current situation is with the A’s, despite the already high attendance numbers.

So in essence, this was a move by the River Cats to jump on the Giants bandwagon and abandon the A’s. At least, that’s how some people on Twitter are in reacting to this news. Some of the language is NSFW.

@susanslusser @RiverCats highest attendance in the PCL but the douchy Giants just have to have everything.

END_OF_DOCUMENT_TOKEN_TO_BE_REPLACED

Here are 10 thoughts after watching the Week 2 games from Sunday.

1– Injuries are a part of the game. But when a load of injuries happen on the same day to multiple players, especially some big stars, then it’s concerning. And people wanted 18 games?

Robert Griffin III’s injury was hard to watch. He hasn’t been the same since his injury in the playoffs and this dislocated ankle could keep him out for the entire year. Add on to Knowshon Moreno’s elbow injury (a couple months out) and it already was looking bad. DeSean Jackson has a shoulder injury. Gerald McCoy broke his hand. Doug Martin’s knee is giving him problems. Vernon Davis hurt his ankle. In the same game, Charles Tillman hurt his arm. Ryan Mathews hurt his knee. Jamaal Charles and Eric Berry both got hurt. A.J. Green also suffered an injury.

What a horrible week for injuries. I hope this isn’t a trend for the upcoming weeks. 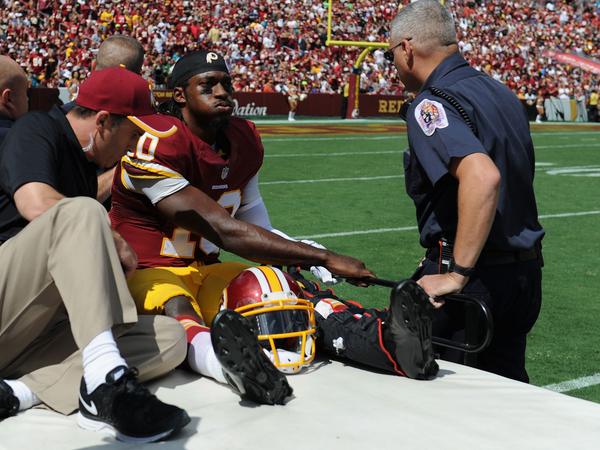